I have been working on building two mid eighteenth century armies to use with old school type rules, the ones highlighted in my last blog post.  While the various campaigns and battles between the “imaginations” of the Emperor and the Elector have been a primary inspiration for this project, this hobby has always been a vehicle for me to explore military history in greater detail.  The campaigns in Western Germany during the Seven Years War have always held special interest given the numerous states involved, the wide variety of uniforms, and the numerous engagements both big and small.

However, having decided to use 1/72 plastic figures to build these armies, compromises have had to be made given the lack of figures for many of the troop types prevalent during this period.  The goal has been to create units based on the actual units that may have fought in the War of Austrian Succession or Seven Years War.  In many cases, this has required a loose interpretation of the appropriate uniform details and the use of paint and conversions to create certain units.  The result so far has been a growing number of units based on actual historical battalions and regiments, even if some require a liberal dose of “imagination.”

The latest unit is based upon the French infantry regiment Conde.  The figures are from Zvezda Russian Infantry of Peter the Great.  The mounted officer is a modest conversion (pistol removed) of a figure from the Russian Dragoons of Peter I also by Zvezda.

Here is the entire unit, 32 musketeers in four companies of eight with additional officers, ensigns and musicians. 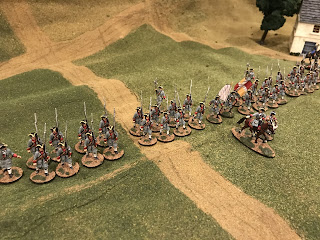 A close up of a company. 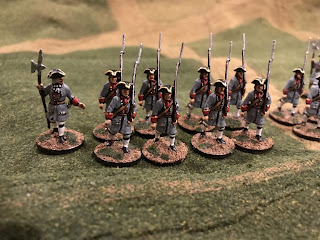 And a rear view of the same unit. 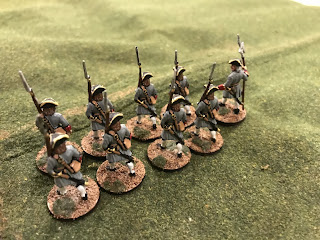 More to come.....
Posted by Military Miniature Diversions at 7:28 PM No comments: